OFF ROAD Macedonia May 25, 2016
I am once more in Monastir-Bitolj. Since my last visit the Bulgaro-Germans have merely intensified their bombardment of this open town.
The Allied troops have made some progress.
They have occupied Snegovo and Kjeramarica, two important enemy positions. So, in order to revenge themselves for these set-backs and because they realize that the capital of South Macedonia is definitely lost to them, they are trying to destroy the town and exterminate its inhabitants.
My entry into the town was attended by no obstacles. 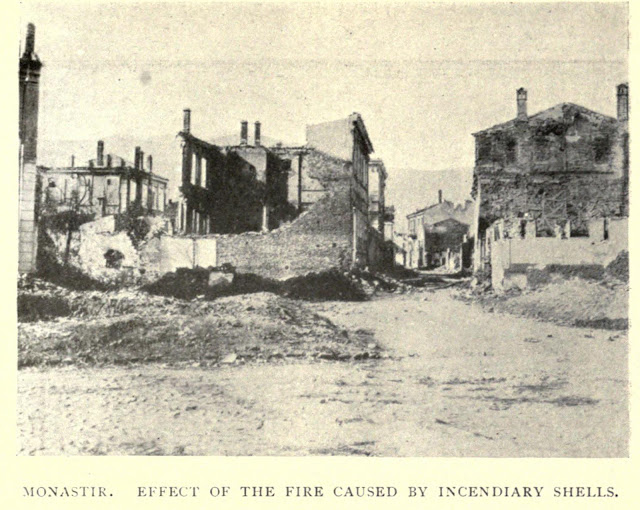 Since the artillery of Ferdinand of Coburg has been forced to confine itself to an indirect aim in consequence of the capture of the heights north of Monastir by the French the bridge near the railway-station is less exposed to bombardment. On turning into King Peter Street, the main street of the town, I observe that the number of buildings damaged by projectiles has greatly increased. In this street there is scarcely a house which has not been struck by at least one shell. Not a window-pane is left, and you walk on powdered glass.
The private house, where I used to lodge during my previous visits, has been wrecked by three 210 shells.
But this street is not the only one that has suffered from the bombardment. All the rest, including side-streets, have had a great number of buildings either damaged or completely destroyed by the fury of the Bulgaro-Germans.


At the Prefecture I learned that about 2,500 houses have been destroyed or badly damaged by the bombardment.

As my former quarters were no longer habitable, I accepted the hospitality very kindly proffered me by Dr. van Djik, of the Dutch Red Cross, in the School of the Sisters of St. Joseph, which had been transformed into a hospital for civilians.
For four months and under a rain of shells, Dr van Djik and his six Dutch sisters of mercy have nursed the hapless population of Monastir. The Dutch Mission has done excellent work and shown heroic devotion. The Serbs have recognized this officially by conferring the Gold Medal for Gallantry upon Dr. van Djik and the Silver Medal upon each of the six nurses. This distinction is only in rare cases bestowed upon the Serbian medical staff, and had never before been given to foreigners.
In the hospital the doctor showed me several victims of Bulgaro-Teuton gas shells. They are still very weak, and their faces show cyanosis. They complain of sore throat, of inability to breathe freely, and of nausea. Some aver that the gas tasted slightly of bitter almonds. This might lead one to believe that these projectiles contained prussic acid. But this gas kills almost instantaneously, whereas the Monastir victims of the savagery of the Central Powers and their vassals suffer from thirty to thirty-five minutes before expiring. Judging by what I have seen actually in the places that have been bombarded and by my investigations of the debris of the shells, the gas employed must have been carbon dioxide or some similar gas. 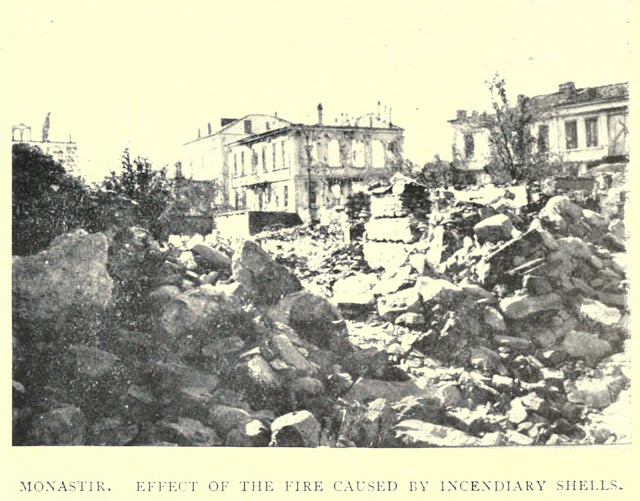 The bombardment with gas shells is carried out principally during the night, when people are asleep in their cellars, or what they call their cellars. These shells make comparatively very little noise in exploding. The explosion liberates a tube encased in strips. This tube acts as radiator and contains the materials which generate the gas. The latter is very heavy and sinks down into the cellars, where it poisons every living creature that happens to be there. 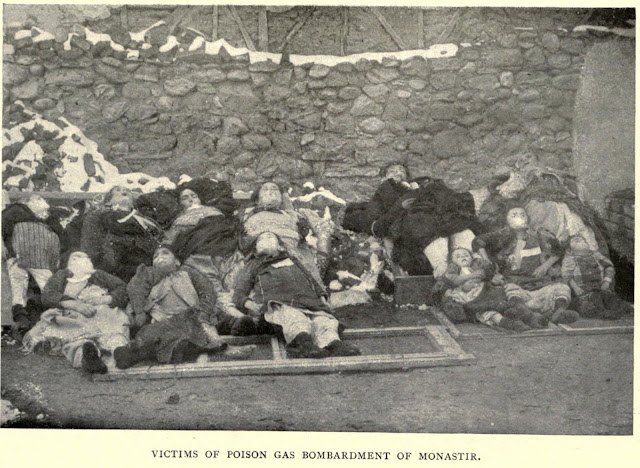 Most of the victims were thus surprised in their sleep.

In the palace of the Serbian Metropolitan alone a handsome building with a spacious basement 37 persons were killed during the first gas bombardment in the night from the 16th to the 17th of March.

This building, which lies far from any route of communication, seems to provide a special target for the Bulgarian guns. Almost every night two or three gas shells fall somewhere near it. It is true that the Serbian church and the Serbian school, which are next door to it, have suffered even more. Evidently the subjects of Ferdinand the Felon want to vent their fury upon all that is Serbian.
Since the liberation of Monastir-Bitolj by the Allied forces the official returns of the Serbian authorities have accounted for 764 casualties among the civil population, viz. 399 killed and 365 injured.

Besides these there were in killed and 92 injured, no indication of the sex being given. I am certain these returns are by no means complete, because, in spite of all self-denial and courage on the part of the civil authorities, competent authorities cannot be every- where all at once and draw up authentic returns in a town which has, up to the end of March, received 5,285 projectiles of heavy calibre, not to mention any quantity of shrapnel, aeroplane bombs, etc.
I must add that recently the Bulgaro-Germans have sought to destroy the town by fire as well. A considerable number of incendiary shells has been sent over. The conflagrations arising from this cause constituted a grave danger to what remains of this once prosperous town, which is almost entirely unprovided with fire- escapes.
Finally, I must draw attention to the fact that all parts of Monastir, without distinction, have been bombarded. Hospitals are not spared by the destructive rage of the gunners of Ferdinand of Coburg and William of Hohenzollern. The former Greek hospital, which was transformed into a French ambulance, has been almost entirely destroyed. The hospital of the Dutch Mission has been shelled, and during the time that I stayed there numerous "marmites " exploded quite near it.
In any case it must be admitted that, in view of their behavior during the occupation and their continuous destructive bombardment, the Bulgars have a queer way of proving to the world that Monastir is peopled by "brothers of their race." I am inwardly convinced that not one of these "brothers of their race " wishes to have any more to do with them. The good folk of Monastir have had a taste of the Bulgar and that is quite enough for them for good.

Excerpt from the book:
THE KINGDOM OF SERBIA: INFRINGEMENTS OF THE RULES AND LAWS OF WAR COMMITTED by the AUSTRO-BULGARO-GERMANS: LETTERS OF A CRIMINOLOGIST ON THE SERBIAN
MACEDONIAN FRONT By Rudolphe Archibald Reiss
Published 1919

Read More: The kingdom of Serbia. Infringements of the rules and laws of war committed by the Austro-Bulgaro-Germans; letters of a criminologist on the Serbian Macedonian front>>>