Why did America enter WW1 on the side of the Allies, and why did it not declare war on Bulgaria?

US President Woodrow Wilson (1856-1925) owed his re-election to his promise to keep the United States out of the First World War.

But five months later, on April 6, 1917 he approved a resolution of both houses of congress which called for the United States to enter the First World War.

What has changed in the meantime and why did America enter World War I? 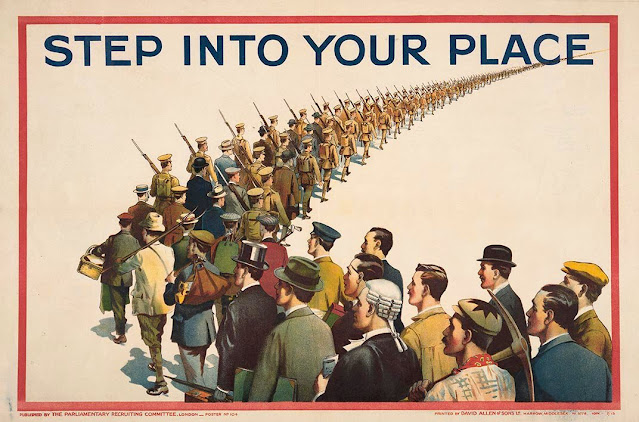 - June 28, 1914 the archduke Franz Ferdinand and his wife Sophie were assassinated by the Serb nationalist Gavrilo Princip, during their visit to Sarajevo, Bosnia.

- On August 1, Germany declared war on Russia, and on August 3 to France. 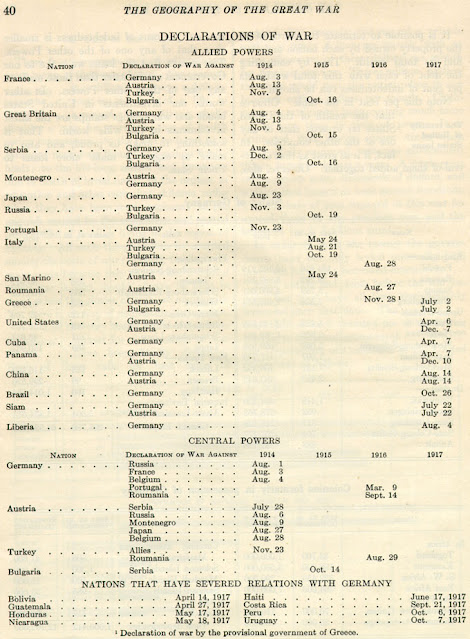 What was the U.S. position at the beginning of WW1?

The war began during Wilson's first term and he spent the remainder of it trying to keep America away from the war in Europe. He offered to mediate the dispute, but neither side took his requests seriously.

Republicans, led by former President Theodore Roosevelt, have criticized Wilson's refusal to build the U.S. Army in anticipation of America's entry into the war. Wilson gained the support of American pacifists, claiming that creating an army would provoke a war.

As the war progressed, merchant ships from America traveled to both warring sides. German submarines killed sailors and civilian passengers on passenger ships and non-military ships. Wilson demanded Germany to stop, but Germany ignored his demands.

Great Britain announced a blockade of Germany so that neutralized ships (including American ones) would not deliver contraband goods to Germany. Wilson disagreed, but the British also ignored his demands. 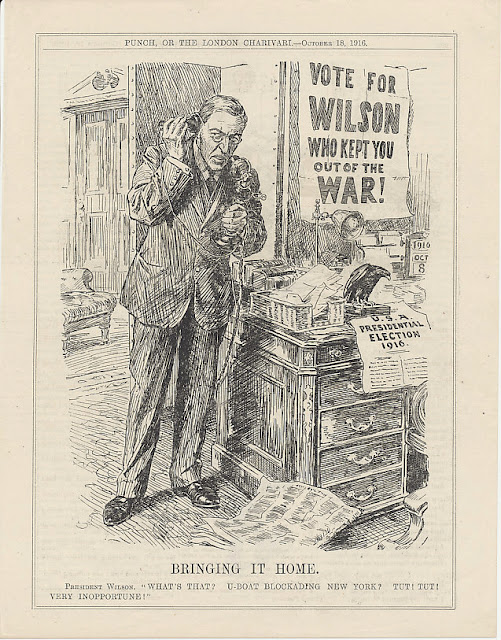 Wilson ran for re-election in 1916. His main slogan of the campaign was "He kept us out of war", referring to avoiding open conflict with Germany or Mexico. But Wilson was careful in his rhetoric, since he never promised not to participate in the war, despite the provocations.

With the British sea blockade on German ports on the North Sea, important raw material imports were prevented, but also the urgently needed food imports.

In order to also cut off Great Britain from the supply from overseas and to force it into peace, the German army used submarines against merchant ships without restriction.

In the first few months the German submarines sunk around 2,000 merchant ships with a total of 3.5 million gross registered tons of cargo space, including Norwegian, Swedish, Dutch and American ones. Thousands of sailors and passengers were killed, the supply of oil for the British fleet and raw materials for the production of weapons and ammunition was halted. Grain also became scarce for the British.

On May 7, 1915, the German submarine U-20 sank the British luxury liner "Lusitania". Of the 1959 people on board, only 761 survived. Among the victims were 128 American citizens; that were decisive for the political earthquake that followed the sinking of the "Lusitania". 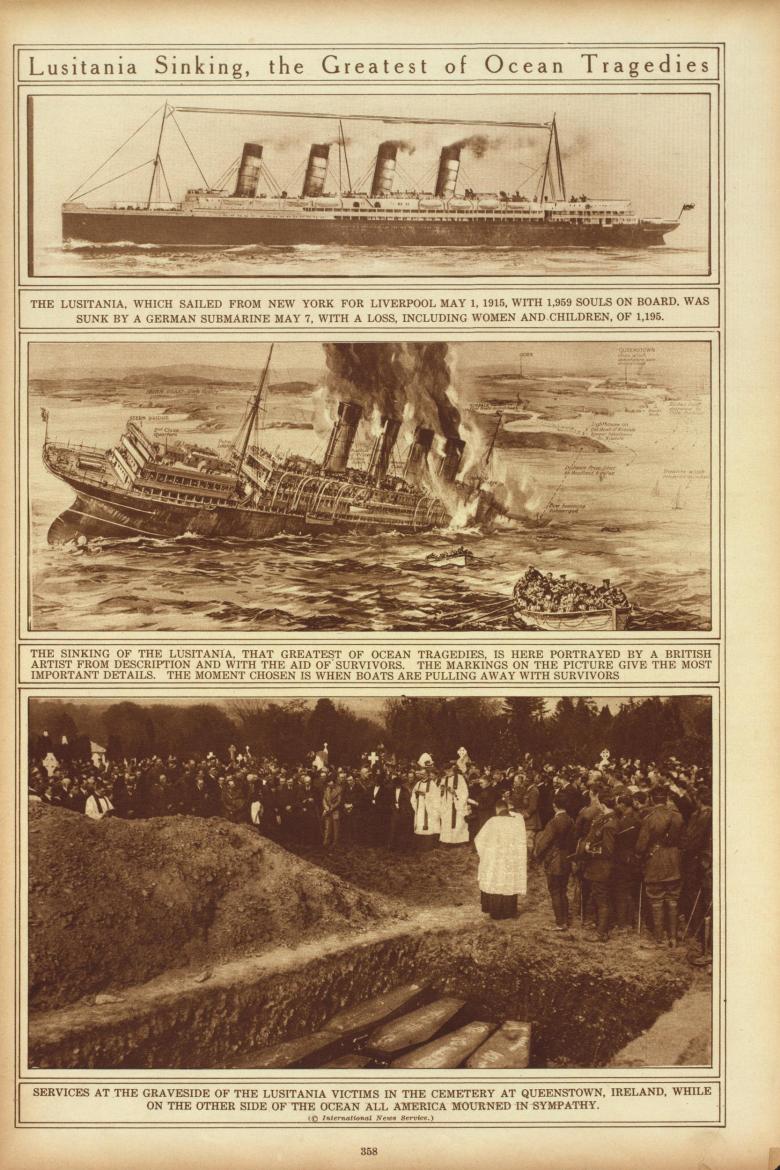 Even a century later there was still a dispute about the sinking of Lusitania.

In support of conspiracy theorists is the advertisement in "New York Times" signed by the Imperial German Embassy in the USA. The advertisement was on the same page on which the Cunard shipping company announced the departure of the "Lusitania" on May 1, 1915. With the heading "Notice!". Travelers intending to embark for the Atlantic voyage were reminded that Germany and its allies, as well as Great Britain and its allies, were at war. It is therefore possible that ships flying the British or Allied flag could be sunk. If you travel in the war zone, you do so at your own risk.

In any case, the sinking of Lusitania played an important role later in the propaganda for US involvement in World War I.

On May 4 1916, the German government signed the so-called Sussex Pledge, promising to stop the indiscriminate sinking of non-military ships. According to the pledge, merchant ships would be searched, and sunk only if they were found to be carrying contraband materials. The Sussex Pledge was a promise made by Germany to the United States.

These were the primary elements of the pledge:

In 1917, Germany high command was convinced that it could defeat the Allied Forces by instituting unrestricted submarine warfare before the United States could enter the war. The Sussex pledge was, therefore, rescinded in January 1917, which started the decisive stage of the so-called First Battle of the Atlantic.

According to the calculations of the German command, even if America gets involved in the war, its current army is too small and by the time of full mobilization and transfer of troops to Europe, Germany will be able to claim victory.

Since the outbreak of the war in 1914, Great Britain has been using merchant ships or so-called Q-Ships, submarine traps, to hunt down submarines. These were old sailing ships that were converted into bait ships with the installation of a camouflaged gun. They were supposed to give the impression that they were unarmed merchant ships and destroy German submarines as soon as they appeared to catch the merchant ship.

In addition, Churchill issued a top-secret instruction to British merchant ships in February 1915 to display false national flags to deceive the submarines. If they were asked to turn around, they should sink the submarine with one ram thrust.

This changed centuries-old rules in naval warfare, to which the Germans had initially also adhered. The use of Q-ships contributed to the abandonment of cruiser rules restricting attacks on unarmed merchant ships and to the shift to unrestricted submarine warfare in the 20th century.

In January 1917 the German Foreign Minister Arthur Zimmermann sent an encrypted telegram to the German Ambassador in Washington.

"We intend to start unconditional submarine warfare on February 1st. Stop. Attempts will be made to keep America neutral anyway. Stop. In the event that this does not succeed, we propose an alliance to Mexico on the basis of the following." Stop. Joint warfare. Stop. Peace together. Stop. Ample financial support and consent on our part for Mexico to recapture formerly lost territory in Texas, New Mexico, Arizona. Stop. "

Тhis telegram was intercepted and deciphered by the British Secret Service, but initially it was not shared with the U.S. officials because they did not want the Germans to discover that British code breakers had cracked the German code.

The British finally forwarded the intercepted telegram to President Wilson on February 24.

The U.S. press carried the story the following week, but Wilson still hesitated asking for a declaration of war. He waited until March 20 before convening a Cabinet meeting to broach the matter—almost a month after he had first seen the telegram.

However, once the contents of  Zimmermann telegram were splashed across newspaper front pages, American public opinion turned strongly against Germany, enflaming pro-war sentiments.

On April 2, 1917, Wilson appeared before Congress with a request to join the war. The majority of Congress, as well as the American people, supported Wilson because they believed they were going to wage a defensive war.

Four days later, on April 6, 1917, the USA finally declared war on the Germany.

After the declaration of war, Woodrow Wilson, the US President, handed over control of the expeditionary force to John J. Pershing. He thus became commander in chief of the US military actions in Europe during the First World War.

America's role in the war

While the US military contribution was small compared to that of the Allies throughout the war, it was crucial in two respects.

1. The US Navy, well prepared from the start, provided ships that helped the British to overcome the submarine threat until the fall of 1917.

2. The US expeditionary force of more than 1,200,000 men under General Pershing arrived in France in September 1918, and this huge influx upset the balance on the Western Front and helped to end the war in November 1918.

How was World War I financed?

Britain financed the Allies until 1916 when it ran out of money and had to borrow from the United States. It had been foreseen in 1916 that if the United States went to war, the Allies’ military effort against Germany would be upheld by U.S. supplies and by enormous extensions of credit.

By April 1, 1917, the Allies had exhausted their means of paying for essential supplies from the United States, and it is difficult to see how they could have maintained the war effort if the United States had remained neutral.

Why America did not declare war on Bulgaria during WW1

Although The United States and Bulgaria stood in opposing camps during World War I, they maintained normal diplomatic relations throughout the hostilities.

The Germany's policy of unrestricted submarine warfare compelled the United States to declare war on it, but the U.S. did not, however, declare war on Germany's allies. Since Bulgaria did not had submarines it didn't directly threaten American interests.

President Woodrow Wilson was under pressure from some oposition members of Congress, who demanded a declaration of war on Germany's other allies, and actualy a statement was drafted that recommend to the Congress to immediately declare war with Austria-Hungary, Turkey and Bulgaria.

The American Board of Commissioners for Foreign Missions and American philanthropist Cleveland Dodge, head of the board of Robert College, wrote to Wilson asking him not to declare war on Bulgaria, saying that it would have no effect on the war, but would harm the work of American missionaries, educational institutions, and American citizens in Bulgaria and Turkey. Wilson agreed to reconsider his proposal.

This is the main reason why America's presence on the Macedonian front was only through humanitarian missions like that of the American Red Cross.

“The Angels of Bitola” and “Тhe Flyless Hospital of the Balkans” – Bitola after the end of the First World War...